Your Number One Online Restaurant Guide 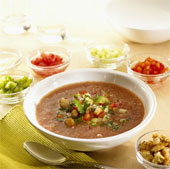 Gazpacho is a cold tomato soup, originally from Andalucia. Nobody knows where the name came from, but it may originate from the Latin for ‘crumbs,’ as true gazpacho is based on bread soaked in olive oil, garlic, vinegar and salt. These days, gazpacho has gourmet connotations, but originally it was a dish for the poor, based on bread and vegetables. Some may say gazpacho is not a soup, as it doesn’t have a stock base and is not cooked; in fact, gazpacho has been called ‘liquid salad.’ But it looks like a soup, and has the consistency of soup, so let’s call it that, as it’s so much easier on my keyboard fingers!
Gazpacho can be served as a starter for a Spanish themed dinner, or, when the temperatures are in the 30’s and you don’t feel like eating anything much, enjoy it on its own. It’s one of the few traditional Spanish recipes that caters for vegetarians, and should be made with quality fresh ingredients for best results. Use a hand held electric blender to make easy work of this typically Spanish dish. This recipe for traditional gazpacho

Ingredients
Garnishes
Serves 4 – 6 people
Soak the bread in cold water for about 15 minutes, then squeeze out water and blend bread with garlic until smooth. Deseed and chop the tomatoes. Blend everything together and add salt and paprika. Drizzle in olive oil, then lemon juice or vinegar, keeping the blender running. Add water, using a little more or less to obtain the consistency you want. If you want your gazpacho really smooth, whizz it in a food processor, but I think it’s nice to have a little texture.
Chill your gazpacho until ready to serve. Serve garnishes separately for your guests to help themselves. Buen Apetito!

EatOut Costa Blanca - the number one guide to bars and restaurants from Denía to Los Alcázares with Torrevieja and Benidorm in-between. Never before has there been a restaurant guide of this quality for the food lovers of the Costa Blanca. There is no other Costa Blanca restaurant guide that reaches so many for so little. See your bar or restaurant here in full, mouthwatering colour. This email address is being protected from spambots. You need JavaScript enabled to view it. today for your chance to show the Costa Blanca and beyond what's on your menu.

The variety of food available when you want bars or restaurants for eating out is endless. If your food preference is familiar food from your home country or your eating out choice is food from afar, our Costa Blanca Restaurant Guide will surely have a restaurant to oblige. Can't find the perfect venue for a romantic night out or just looking for a take away pizza? Whatever you want, we'll find it for you. Just This email address is being protected from spambots. You need JavaScript enabled to view it. and we'll find something to tempt you.